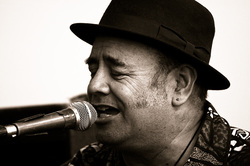 Rhythm blues was a form of blues with more emphasis on certain instruments, and a rhythmical step dancing, the lyrics told more of a story and were in a rather poetical form. It is believed to have started in New York, 1938.

Famous artists within R & B.

1.  Ray Charles, whose nickname was "Genius" due to his musical talent, played R&B and Country. Active from 1949-2004. Despite being blind from the time he was 7, Ray managed to create a long string of hit R&B/Soul songs and albums over more than five decades, plus also help integrate Country music by releasing two Country & Western albums. famous hits include "I Got a Woman," "The Night Time (Is the Right Time)," "Hit the Road, Jack" and "Georgia On My Mind."

2. Stevie Wonder is one of America's greatest singer-songwriters and had a long string of hit songs from the 1960s through the '80s. Despite being blind, Stevie managed to become one of the most creative singer-musicians of the Motown era. He's also won more than two dozen Grammys during his career. His first hit single was "Fingertips (Pt. 2)" in 1963, when he was just 13 years old. Since then, his chart-topping songs have included "I Was Made to Love Her" in 1967; "Signed, Sealed, Delivered, I'm Yours" in 1970; and "I Just Called to Say I Love You" in 1983.

3. Robert Leroy Johnson (May 8, 1911 – August 16, 1938) was an American blues singer and musician. His landmark recordings from 1936–37 display a combination of singing, guitar skills, and songwriting talent that has influenced later generations of musicians. Johnson's shadowy, poorly documented life and death at age 27 have given rise to much legend, including the Faustian myth that he sold his soul at a crossroads to achieve success. As an itinerant performer who played mostly on street corners, in juke joints, and at Saturday night dances, Johnson had little commercial success or public recognition in his lifetime.

Guitar, bass, and drums, but the instruments implemented into the genre are quite limitless.

Unique do to its poetry and rhythm based foundations, R&B sets itself apart from other genres.

Where the genre can be found today.

Most likely to be found on the radio, or with purchase of dvd, some clubs might have the genre available to listening.

R&B has taken in on heavy influence from soul and rap and such elements can be heard while listening.

Create your own unique website with customizable templates.
Photos used under Creative Commons from Dorron, Scott.Symonds