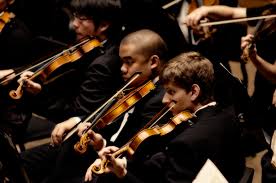 The genre of soundtrack is based mostly upon German romance period orchestral symphonies which feature prominent violin, trumpet, and vocal implement. This style started as early as 200A.D, commonly used as church orchestration and music. However, the term and particular style of soundtrack started around the 1940’s, soundtracks being used as film scores and eventually game sound tracks.

1. Thomas Jacob Bergersen (born July 4, 1980) is a Norwegian composer who is the co-founder of the trailer music production company called Two Steps From Hell and has written music for several high profile trailers. In May 2010, he and his business partner, Nick Phoenix released an album called Invincible, featuring some of his most popular tracks including "Freedom Fighters", "Moving Mountains", "Heart of Courage" etc.[1] In 2010 he also composed the original music for the movie The Human Experience. The Soundtrack CD was released on March 29, 2011.

2. Lindsey Stirling (born on September 21, 1986) is an American violinist, dancer, performance artist, and composer. She presents choreographed violin performances, both live and in music videos found on her YouTube channel, Lindseystomp, which she introduced in 2007.[1] In 2010, Stirling was a quarter-finalist on the fifth season of America's Got Talent, where she was known as the Hip Hop Violinist.[2][3]Since 2010, Stirling has released a self-titled album, an EP, and several singles.  She performs a variety of music styles, from classical to pop and hip-hop to dubstep. Aside from original work, her discography contains covers of songs by other musicians and various soundtracks.[4][5]

3. Koji Kondo was born in Nagoya, Japan, on August 13, 1960.[citation needed] He began taking lessons in the electronic organ from the age of five. He improved his skills in the instrument in a cover band that played jazz and rock music.[1] Kondo studied at the Art Planning Department of Osaka University of Arts,[2] but was never classically-trained or particularly dedicated to music. However, he gained some experience in composing and arranging pieces, using both the piano and a computer to assist him. During his senior year, Nintendo sent a recruitment message to his university stating that they were interested in hiring people dedicated to composition and sound programming. An LCD and arcade gamer, Kondo successfully applied for the job in 1984 without requiring any demo tapes.[1]

European music is largely distinguished from many other non-European and popular musical forms by its system of staff notation, in use since about the 16th century.[2] Western staff notation is used by composers to prescribe to the performer the pitch, speed, meter, individual rhythms and exact execution of a piece of music. This leaves less room for practices such as improvisation and libitum ornamentation, which are frequently heard in non-European art music and popular music.

Where it can be found today,

Classical music can be found as the OST of many movies and games, other than that, opera’s and concerts are excellent suppliers of this genre.

If you were to compare old and original pieces of classical music to what is produced today, you will find a rather large difference. Current forms of orchestral symphony have evolved to include more electrical implements, wether via an electric instrument, sound effects, or a do over on a computer, there is a clear difference between the then and the now, in fact, some current forms are identified as "new age" music.

Create your own unique website with customizable templates.
Photo used under Creative Commons from Jorge Franganillo